Banksy is without a doubt the biggest name is street art and an artist we are proud to have been championing since his early days.

His enduring popularity despite remaining anonymous has been further proven by the recent report stating that his iconic ‘Balloon Girl’ motif was voted the nations favourite artwork.

In print form, it is without a doubt Banksy’s most sought-after edition with signed copies now commanding six-figure sums. The original street version was first hastily sprayed on a London shop over 15 years ago and beat of classics including Jack Vettriano's ‘Singing Butler’ and David Hockney’s ‘A Bigger Splash’.

Earlier this year Banksy made headlines just before the UK general election. The surreptitious artist made a statement offering a new ‘Balloon Girl’ print with a Union Jack design to those in certain constituencies that voted against the Tories. He claimed, "This print is a souvenir piece of campaign material, it is in no way meant to influence the choices of the electorate".

Almost as quickly as it had been promoted Banksy regained on the giveaway stating on his website “product recall”, with the message: “I have been warned by the Electoral Commission that the free print offer will invalidate the election result. So I regret to announce this ill-conceived and legally dubious promotion has now been cancelled.” 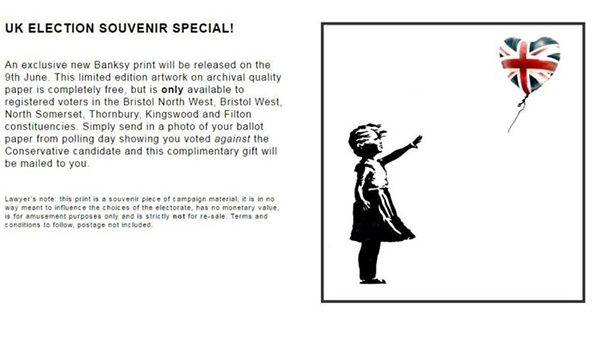 At Rhodes Contemporary Art we pride ourselves on being London’s pre-eminent source of Banksy prints on the secondary market. Always sold with full Pest Control certificate of authenticity (COA), directly from Banksy’s own handling agency, we 100% guarantee authentic works by the artist.

For any enquiries into buying or selling any Banksy artwork please contact the gallery on +44 (0) 20 7240 7909 or email us at info@rhodescontemporaryart.com.